Underground Resistance is a name that causes feelings of deepest respect for most of us as this collective is one of the main reasons electronic dance music is where it is today.

Due to a recent incident we felt it is about time to reconnect with UR to find out where they at, and give some education to the ones that did not know, speaking to Cornelius Harris from Alter Ego Management.

Cornelius, you are one of the driving forces in the Detroit music scene, tell us how it all came to life and what was and still is your involvement with Underground Resistance.

Detroit has been a hub for all sorts of amazing talent for years and I was into all of it. Jazz, hip hop, techno, house, spoken word, you name it. In the mid-90s Michael Banks (UR founder) approached me about putting together bios and press releases for Submerge, which later led to him offering me to become label manager.

You certainly agree that it is more than ever important to keep being integer in all this bulge of commercialism infiltrating what we love most – electronic music.

Once anything is sold, in any way, it’s commercial. It’s not the problem of commercialism so much as it being empty. A beautiful box with junk inside. We always think of what’s inside that box, making sure that there’s something of value there, so yes, you might just enjoy the music, but if you dig deeper, it’s always essential to have something more there. We simply look past the now and envision what’s coming. Especially as it pertains to our situation as a constantly displaced and unappreciated people. The sound of that struggle can’t be imitated and it reaches into the core of other people’s similar situations worldwide. “Those who know.”

How is the music scene doing in one of the cradles of House music that is Detroit?

One of the great things about Detroit is that it is not limited to one genre. Detroit is known for gospel, rock, jazz, blues, and techno as well as being home to the legendary Motown Records. There is a thriving underground hip hop scene. And the musicians are fierce. I feel very comfortable in saying that musically Detroit is one of the deadliest cities on the planet. Consider this an invitation.

Any advice for the new kids on how to not get brainwashed by mainstream media?

It comes in many forms and from many directions. “Do Not Allow Yourself to be Programmed!” (UR-033) is even more relevant today. How do you avoid brainwashing? You can’t. But if you can remember to think, to ask sometimes difficult questions, then you have a chance at diminishing the power of that brainwashing. (UR-3000). 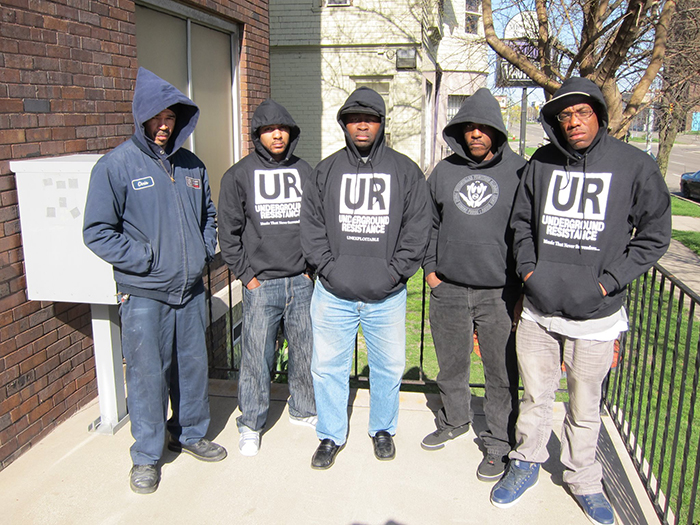 What are the musical projects UR is involved right now?

UR has been out live with the groups Timeline and Depth Charge, but we’ve been starting work on the next Interstellar Fugitives project. In addition, Nomadico’s Yaxteq label launched as has Jon Dixon’s 4Ever4ward. Mark Flash’s Audiofluid is about to start releasing soon as well. On top of all that, Bileebob is working on some new material and a new artist, Gerald Brunson, is in the works too.

The letters UR were abused lately in a promotion for a new party series in a new club here on the island, causing a shitstorm in social media making the promoters turn their campaign into something different. What was stronger, anger or frustration about such ignorance?

Both were there in the beginning, but neither does much to move things forward. We’ve been fortunate in that we have great fans, fans on all levels, and the underground has always been ready to take action. Many fans and listeners know it as “condition red” (UR-043) and they’ve never let us down. Things could have gone worse, but fortunately this light in the ass situation didn’t.

We already had a girlie on the cover of dub in 2007 with a glimmer shirt showing the photoshopped UR brand as head for an article desperately searching for the underground on Ibiza. How do you perceive the island those days?

It’s still perceived as a playground for the drug addled wealthy, though I’ve heard some great rumors about a few promoters who are bringing real music to the island and working to counter the Ibiza hype machine. By putting some emphasis on fans who come specifically for the music, Ibiza has a chance to be more than a party island.

Can it be compared to the musical development in the U.S.?

Not at all. In the US, there’s a tradition of abuse and neglect when it comes to black artists, so you hear some of that pain in the best soul music. And yes, I classify the best techno as soulful.

How does an underground label survive these days?

By focusing on the music. Some labels spend all their resources on putting together a great looking package but the content is weak. While it’s best to have both, good music trumps good packaging in the long run.

If you had a magic wand, which three things would you instantly change globally if you could?

I have no perfect days. Which is good. Each day brings its own beautiful chaos and ends on notes that I could never predict. From hearing new potential releases to talking with agents and promoters, to having discussions with the city Mayor about drag racing and music/creative districts. Every day becomes a window into dozens of possibilities.

While people say hip hop is the CNN of the streets, techno is the heads up on what’s going to happen in the future. UR will continue to be that warning of what’s to come. UR has mentored and sponsored many artists over the years, so it will be great to see all of the descendants of the resistance doing their thing as well.

Through Alter Ego Management, I work to promote Detroit’s cultural capital. A large part of that is in the management and promotion of the roster, but also through working with partners like the Cosmic Slop Rock Festival in Detroit and as an advisory board member of the Detroit Creative Corridor Center (DC3). I’m also working with Dimitri Hegemann (Tresor club founder), Mike Banks (UR) and others to use the music as a catalyst for the economic development of Detroit (and beyond). I love this business and plan on continuing this work in different ways.