The latest German duo to impress us are Achilles & One. Consisting of Jonas and Lukas, they’re arguably our favourite such duo since we first heard the sounds of Robosonic or Piemont. Anyway, these guys have a sound that’s very much their own, and as they confess, it’s somewhere between house and disco sounds. For an indication of what we’re talking about, we suggest you check in with their latest EP on Munich label Love Harder, La Musica. Here, we checked into their world to find out what’s what…

Where are you based in Germany? What’s the best (and worst?) things about where you’re from?

We are from Munich in Bavaria. Probably the variety it has to offer. We have everything from lakes, to mountains and even a standing wave to surf on close by. Munich in summertime is just lovely. The worst thing would have to be all the pretenders and phonies here. But that’s nothing we couldn’t handle. 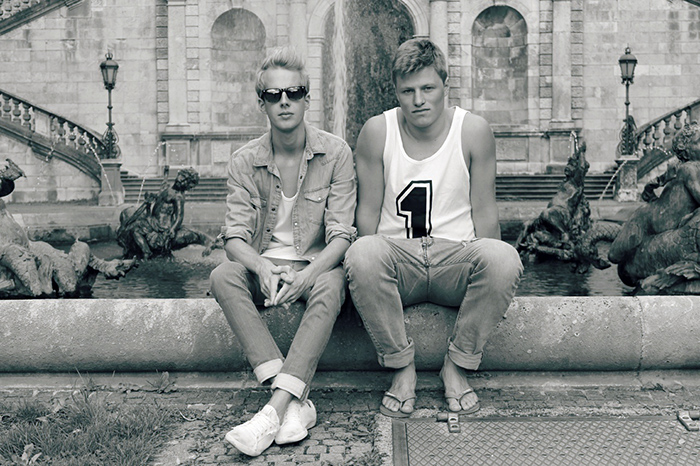 How are you recently? Many highlights?

We’ve been busy in the studio preparing our next release, which is supposed to be out on the 22nd of December. Summer was great; we had a couple of great gigs and also found the time to go out to some festivals ourselves to take in some new impressions. Allthough technically not summer anymore one highlight has to be our gig at the Baalsaal in Hamburg a couple of weeks back.

So where are you at now with your music? You guys in a good place with it all?

We are still developing our own style as far as productions go. We are definitely on the right track but not completely there yet.

How do you stay motivated musically? What’s influencing you a lot these days?

Whenever motivation fades we found it’s best for us to just take a break for a couple of days to get our minds off it. Afterwards we are so eager to make new stuff everything just works on its own. We listen to a lot of music from producers we respect to see how they approach certain sounds or arrangements and such. With that in mind we try to create our own take on it and see how it works out.

Do you purposefully try and challenge yourself with your sound? Or are you at a stage where you’re very confident with your skills?

We are always trying out new stuff on every track we create. Not only would it bore ourselves in the studio but also all the tracks would sound similar which is something we do not want to happen.

So how would you describe your current sound? What equipment do you use to make most of your music?

Our current sound is somewhere in between house and disco with a very classic edge to it. At the moment it comes all out of the box. We work with ableton 9, machine and a keyboard.

So can you tell us about the La Musica EP? What was the idea there?

We created the tune in summer time and wanted to create a Balearic house tune. We started out with the big piano line and developed the rest from there on. Luckily we found the vocal sample, which fitted perfectly and kept building on it. It was the very same day that Germany won the FIFA world championship that we finished the track!

Are you generally a fan of colourful house music and Balearic stuff? This EP sounds like it’d do great in Ibiza, right?

Yes definitely. We are suckers for good melodies and big piano lines etc. Balearic stuff just has such a great positive feel attached to it. What’s not to like? We would sure hope so!

What’s the next direction for you guys as a producer? Would you ever consider deviating away from house and techno?

We always had plan do to an EP with very synth heavy disco tunes around 100 -110 bpm. So that would definitely be something else. Let’s see if we get around to it.

So what do you listen to in your free time? Do you feel it’s important to stay eclectic and listen to other types of music away from 4/4?

Hard to say. It’s a mix of every genre but probably like 50% house music and 50% everything else. Doesn’t have to be 4/4 all the time.

Do you feel the house and techno scenes are in a good place right now? What would you change about them if you could?

Not sure about this one. On one hand places like Ibiza seem to fall victim to the rich people who want champagne and listen to EDM, but on the other hand there will always we new exciting places that come up. House music will always be there. You just have to know where to look.

Do you think the scene can be a bit pretentious at times?

Yes definitely. It’s a shame though. Some people are just trying so hard to maintain a certain image even if it’s not truly them. We would say, stop pretending and just be who you are. More fun that way for everyone.

So what are the biggest challenges facing you guys right now then?

We would like to play more gigs, preferably outside of Germany. That’s one of the things we are working on currently.

So how important do you think marketing is to upcoming DJs and producers?

Probably the most important aspect. Your music can be the best in the world, but if none ever listens to it, who is going to know?

Are too many DJs and producers involved in the scene for the wrong reasons?

We don’t really know the reasons why everyone else does it. We could only talk about ourselves. But to answer the question there are probably a few in it for the wrong reasons like in every other field out there. We don’t see it as a big problem to be honest.

When selecting people to remix your work – how does that work? Did the label choose them or did you have a final say? Whose remix surprised you the most on the EP?

This time we chose all 3 on our own. We kinda talkeD to Kenny online after he gave us amazing feedback for our Burning EP and asked him if he wanted to do a mix. As far as Magic Touch and Mighty Mouse are concerned, Jonas met them while he was working at a club here in Munich because he like picked them up at the airport and went to dinner with them etc. So we had the contacts already. And their music is just outstanding. So naturally we wanted to hear what they could make out of our track. Most surprising is hard to choose, if we had to it’d be the Mighty Mouse remix. Such a dirty little techno house anthem. We love it!

And lastly, what’s the idea behind your name?

It actually derives from the tale of Troy and the great Achilles. But every hero needs someone to help him through the harder times. Therefore we went with Achilles & One.

And one more – what’s your Achilles heel?!

Read the review about it here.

Achilles and One // Love Harder Records