Better a sane insanity as an insane sanity.

We are in a room in Hard Rock Hotel where the creators of the ‘Children of the 80’s’ event were so friendly to allocate us for the interview with Tomás Manjavacas, ‘the Sheriff’ as he is respectfully entitled by the people in this hotel where he is working, or better said, where he is supervising the whole scenery.

Tomás started working for the Palladium Hotel group 27 years ago and nowadays he is considered, well this, ‘the Sheriff’. Born in Ciudad Real in Spain, in a village called Manzanares in 1954, Tomás says ‘I boast to be a cousin of Don Quijote’ and, after an extended laugh, looking at his profile I got the sensation that truth may lie within. At the age of 17 he started to work in a hotel in Benidorm and already had the history of the Hippies on his mind. ‘I knew I wanted to travel a lot and speak many languages’, he says, ‘I was fascinated by the Hippy movement’. 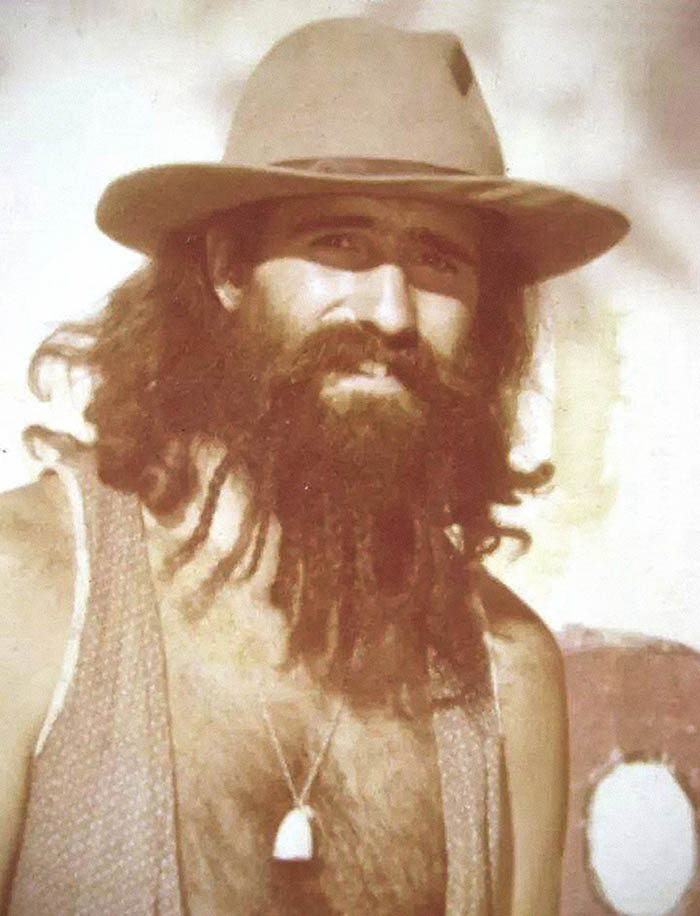 Tell us about how you came to the island.

In 1973 I arrived to Ibiza, just for a few months. Pacha from Ricardo Urgell was inaugurated, before there was only Lola’s. In this era I also slept in some cave. Then, in 1976, I decided that my life was to be here, and look, until today…

People say that Ibiza or attracts or rejects you – do you agree?

For me it was totally natural. The fact that I got three ibizencan children, two boys and one girl, says it all.

Knowing that it’s impossible to compare, but if you look at Ibiza in 1976 and in 2016, is there anything in common?

Look at me. People tell me that it changed a lot and I always give the same answer – there is no change, nor good nor bad, it’s evolution. 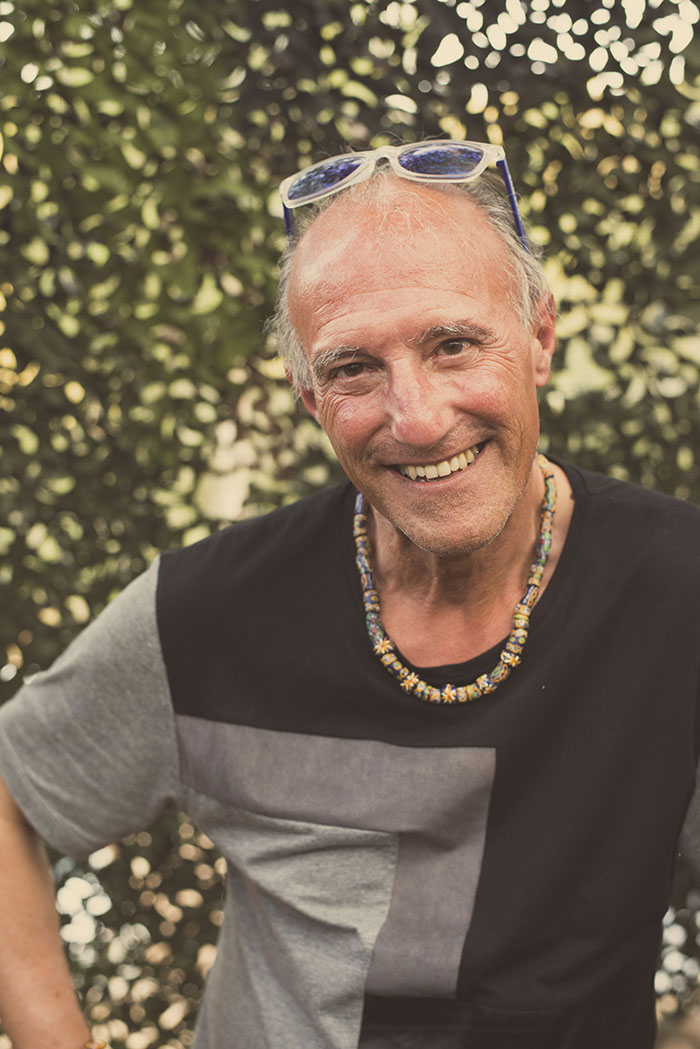 So true. What i mean is that if a teenager comes to the island today he gets the same impact we had on our arrival. That the spirit remains the same, no?

One thing is the spirit, the other is travelling to get to know the world. In this case, for a tourist or for people like us living a free life loving music, if you imagine Ibiza to be one thing and then you find yourself on this Ibiza, not so much. The same goes for us having an illusion about India and then you find out that it’s not. But for me there is one thing very important, in India as in Ibiza, what creates this spirit, this script of the island, is the mix of people you can get – the rich, poor, the colours, when one gives life to another inducing the spirit.

Exactly, one thing enriches the other.

If we were to be normal we wouldn’t be here.

Very true this is. I read on your Facebook that you studied at ‘the school of life’ – you are an autodidact?

Yes absolutely. Of studies little, just enough. I travelled the world a lot to get to know it before coming to Ibiza for a living. This altogether helped me to get into the world of tourism, of public relations. When I worked at Bar Graffiti from ’78 to ’80, I was into public relations, even if I never took any commercial benefit out of it, but you know well that I always helped anybody wherever I could.

Oh yes I remember very well. I always admired you for doing so. Philipp from M.A.N.D.Y. once cited a great phrase going ‘don’t ask what the party can do for you but what you can do for the party’. There are far too many spectators in Ibiza, is there a lack of actors?

The most important thing is that there are people and diversity. This way the crazy, the normal and the abnormal stick out. Like in Circo Loco, when somebody says ‘what a madness on the terrace, and what happens inside?’ and I tell them ‘look, here is the circus and inside are the crazy’. 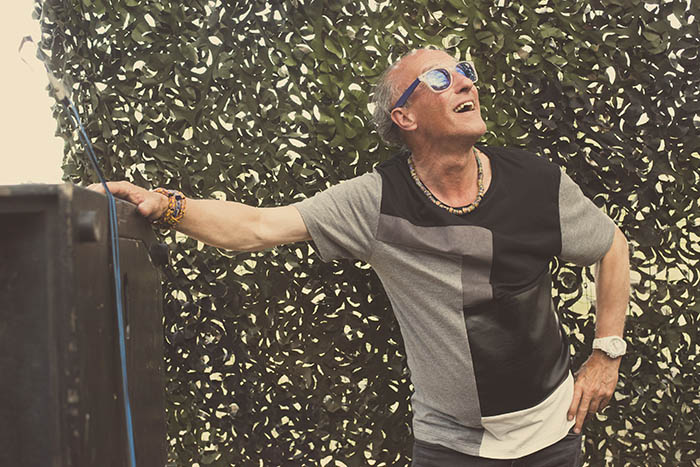 As you perfectly say – ‘better a sane insanity as an insane sanity’, no?

That’s my philosophy of life, got this phrase in my mind for 35 years and I live it most intensely.

How do you preserve yourself so well? What’s your secret…

Not a secret but an important part of my life were the years where I was running marathon. During 10 years I ran and complied 5 marathons, 13 half marathons, at the age of forty-something. That gave me a physical and mental strength learning a lot about life itself. The discipline to be alone, to get yourself up and say ‘hey, I will run these 26 miles’, and I did – this has served me a lot for all. And, above all, what we said in the beginning, the people, finding yourself covered by them, one step at a time as this doesn’t happen overnight, you have to work very hard for it, but years after you see the affection, the respect people have for me, is priceless. You can’t pay for it nor buy it.

And you can’t lose it. As this island is so intense, with experiences capable to change your life from one day to the other, this is something that marks you for life. As we are an island full of lunatics we have to support each other, go hand in hand.

Very popular people have given me a phrase: I live my life as some form of slavishness, this is my way to be. I give without ever expecting anything in exchange, the word slavishness can mean something uncomely, well I am very thankful to be able to be there.

Is this the essence of life?

I do not own anything, don’t want anything, nor expect anything, and I got it all. The less you expect the more you cherish what you have.

If you could change three things in Ibiza, as if you would have a magic wand, what would them be?

I would change what Ibiza still wants to be, that people still wanto to keep being happy, and I would change life as it is – what I want to say is ‘to change – what for?’ Look at me… 62 years – olé!

This brings me to the next question – how do you see yourself in 20 years?

I don’t know if I’ll still be around. Life is what it is, maybe tomorrow I am already gone. That is why you have to live and enjoy life in every moment, every instant, as intense as possible. I think that is the philosophy. People enact so many laws, so many limitations and rules that don’t serve for all, what you have to do is live.

You let yourself be guided by instinct, intuition.

If I like something, everybody, my family and friends say this means danger because I go for it and give it all.

What does it take to be a good PR?

For me it is respect, kindness, giving it all, the rest comes naturally.

Did you ever have a bad experience at work?

Not one single moment, I have lived a lot and I have seen many things, but me personally I haven’t had one bad experience. I guess it is because of my way to be – who could do me harm precisely because I have maximum respect, absolute affection and always give it all?

How do you combine your work and your family life?

My kids are grown up by now, my daughter is 34 years old, and my boys are 30 and 28. They always knew who their father is, the nutcase of sex, drugs and Rock n’Roll but a good person to them, this is what counts most. I know how to be there for them, I gave them the freedom I believe to deserve myself. That plus love and affection are of the most important. All other, if they study or not, if they make money or not – well look at me, I got it all without possessing everything.

Let’s not get into asking who is your favourite promoter because this is hard to say, but no night is the same, no?

No, every night, every party has its own. The beauty is knowing how to cherish, how to get it. I have no idea about music, I like it and feel it, so I can’t put forward an opinion, but I did talk to DJs as important as you know it, and I said ‘look, people come to a venue to listen to music, but let’s not forget that people go out to have fun’. The music and the DJ can be as good, but the important thing is that people have fun.

That Ibiza is ever more expensive, that we become another destination like Miami, Las Vegas or Saint Tropez, what’s your take on this?

This is what people say since 40, 30, 20 and 10 years. At the time I worked in the Bar Graffiti in the port in ’79 the price for a cocktail was 500 pesetas, that was a lot of money back then. Ultimately I have discovered one thing, people talk about the clubs with their shows and DJs as if it was expensive, but how much do people spend to see a football match? From 80 to hundreds of Euros, and how much do they spend on four drinks and all the other? But this, as it is somehow ‘normal’, doesn’t count… They spend it all to see a match with Barcelona or Madrid, well this is the cream of nightlife, and therefore has its price.

Well said Tomás. One last question, what do you think about dub magazine?

For me it has been the very first magazine in Ibiza talking about electronic music in a different way. After that lots of other magazines appeared, even the clubs began to release their own publications. I guess the one of Pacha was the first one that Ben Turner published, after that Space and Amnesia released theirs, but they disappeared. And there is the small one – what’s the name of it?

It was Partysan, our very first publication from 1996 to 2000, later becoming dub magazine as neither the format nor the effort were adequate, not even to live of.

Well, as I said, you were the very first one and this deserves all the respect I got for you.

So have i for you Tomás, for being how you are and for showing the people that the most important thing in life is to give it all, and therefore be able to receive it all.