These and many more names describe the endless variations of the same open minded musical spirit that is spreading on the toast that is global club culture like peanut butter for some time now. Something exciting and unstoppable is happening on the electronic music axis between Buenos Aires, Sao Paulo, Cologne and Berlin… funny it would sound & feel like all of this could be tailor made for Ibiza as well. These are the good times cause there’s a rumble in the jungle that’s big enough to rock even this rock. Electronic music is becoming intelligent again, it seems. And that has to do with a higher level of perception and awareness in more than one way.

While most of us spent the better part of our nights dancing away in shamelessly overpriced, rather overrated indoor venues to the same old same old (that has been trying to reproduce itself for maybe a bit too long now), wrapped in neverending new marketing bubbles by corporate suits and hyped by the same faceless protagonists for decades now, there’s a new, a different sort of club based spirituality emerging at the melting point of all the above mentioned genre descriptions… and its slowly but surely claiming the (more intelligent) dancefloors, DJ playlists and festivals around the world. 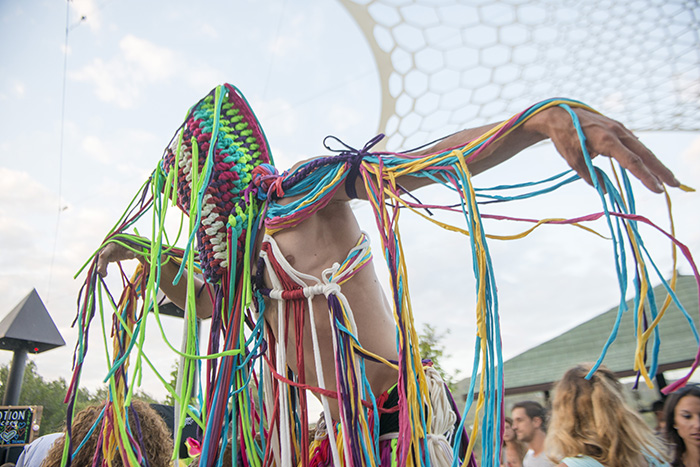 Genre dons like Nicola Cruz, Chancha Via Circuito or El Buho have either played a main slot at SONAR already and/or graced the infamous Boiler Room with one of their impeccable sets made of previously mostly unheard goodness. Labels like ZZK Records, Fertil Discos, Tropical Twista, Regional (just to name a few) deliver the unfiltered goodness, picked up, licensed & spread globally by imprints like Project Mooncircle, VoooDooHop or Katermukke just to name a few. Hip media like Thump, XLR8R and the likes picked up on the vibe a while ago, hence the first innocence of the whole movement is on the way out the door already – meanwhile, the eyes and ears of the club world are honing in.

We are talking (and hearing) mostly rather effortless, organic credibility here, the contemporary essence of all things electronica mixed with credible folklorical heritage. Yes, you CAN dance to these beats… but you don’t HAVE to. And if you do, don’t stress yourself. 100 bpm will do mostly, maybe just a pinch more – in fact that’s quite fast already to those in the know. And people dance to THAT, you ask? Yes they do. Meanwhile, they are legions. And not only does it feel better – it looks better as well.

Even here on the (not really so) white isle, you can see some of the results every Sunday during “Acid Sundays” at HEART. The man they call Acid Pauli, halfgod of all tribes and hailing from a certain (rather nerdy) breed of the vivid German underground electronica circuit, is the first “big name” on the international scene (and the best example) to embrace global beats & vibes (in particular south- and central American) with the adequate intensity…and a peaceful smile. Well informed sources claim the latter is mainly down to the fact that he is quite aware of the goldmine he has just drilled into. Bless him.

This music won’t rub on your leg or jump in your face. All these years you were being fooled into believing that it has to be like that. But this vibe dares to make a big difference right there. Mainly delivered simply as a beautiful aural offer riding a beat, pleasant for the ones who care about authenticity, and nurturing to those that have been dehydrating in the desert of Tech house, Trance and EDM monotony for just a bit too long, waiting for something to happen that brings the real heartfelt smiles back on the floors. Something that they can shake a leg to but at the same time makes them feel a precious part of the bigger picture. 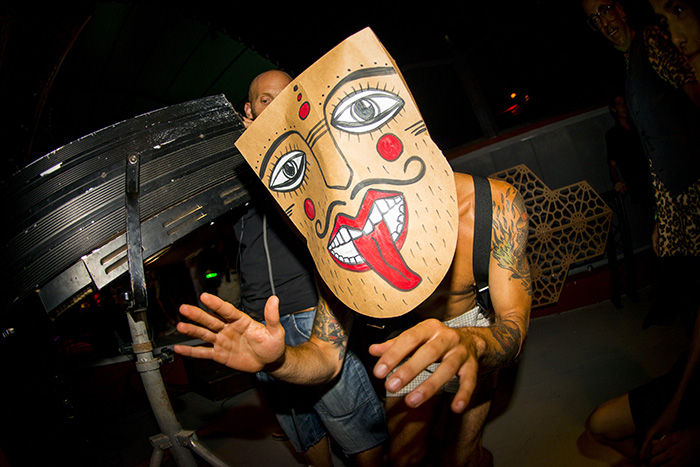 While this ain’t “the next sound” of “the next season”, it’s not even a musical genre really, the overall vibe (and attitude to go with it) feels like big ancient circles closing in. “World Music”, it seems, has grown up at last. From the early days of hippy stereotypes (still very popular among the consulting resistant not only but especially in Ibiza) via a sort of unreflected “solidarity at any price” culture mix (aka “passive exploitive colonialism”), we have at last arrived at a point where a growing number of gifted creators are effectively marrying their ancient local cultural heritage with contemporary electronica (we won’t mention “club sound” here particularly as that is just a small part of electronica – a fact that should be remembered especially here, in this so called “capital of electronic music”).

Along with the musical spirituality, there’s something else… and here is where perception & awareness comes in again. Back in the days, you had a party. A cool event in the best cases. Way way before parties, and these days again, it’s rather called “ritual”. In most cases it does feel like one, setting the mood for a unique collective vibe that needs no pronunciation. The sound – you guessed it – could be described as rather tribal, with the crowd attending coming from all camps & all ages more or less. It’s not about fashion, it is about awareness. Inner journeys. Likemindedness. Spiritual kinship in a way. And in that sense, the whole movement has something very radical and political about it. Not to mention a totally different set up of mood enhancement as well of course.

La Granja, the latest (and very casually hip) addition to Ibiza’s slowlife agroturismo hotel landscape, focuses almost completely on a special music policy in that spirit and has just seen a one week mini festival called “Music & Rituals – the Habitas experience” for those in the know, featuring an international roster of illusive DJ names like Peter Power, Sabo, or Pablo Sanchez. Every Sunday of the season, La Granja presents their own holistic version of such a ritual, adressing all senses. Burning Man meets Belize meets Bali meets Benirras – go figure… The Malanga Café in Ibiza Town holds a regular tropical night hosted by Cris Kai – while the most prominent event in terms of this new spirit is called WooMooN. Once a week on a Wednesday, the aptly chosen Cova Santa location turns into a psychedelic jungle including all kinds of spiritual performances with genre darlings like Nicola Cruz, Jhon Montoya, Behrouz, Chancha Via Circuito, Crussen and Martha Van Straaten. All of them representing a different and unique approach to what might well be a paradigm shift in terms of decently matured dance culture. 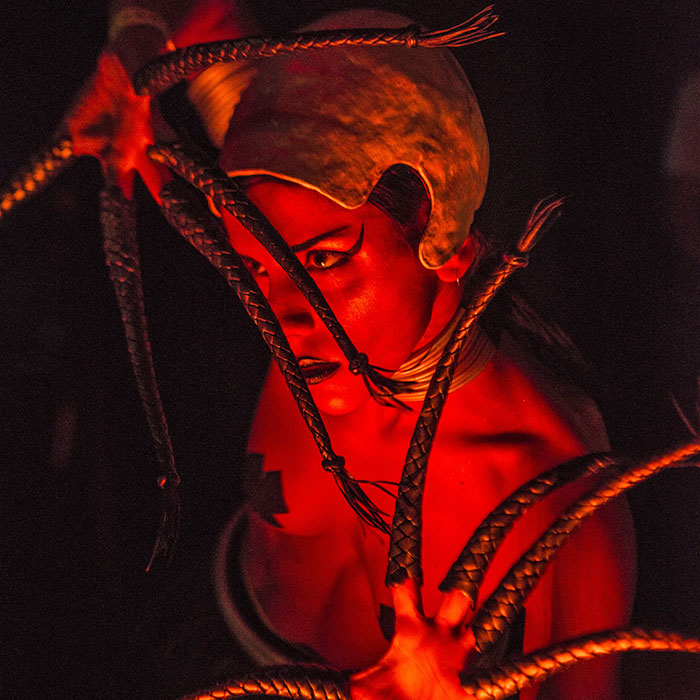 No surprise that in terms of logistics, marketing and promotion somehow, all roads lead to Berlin. Tastemakers like Martha Van Straaten, Lotte Ahoi and collectives such as Urban Cosmonaut Radio or Laut&Luise plus a string of other individuals & collectives gather sound from all corners of the world to cater to the vastly growing demand inside and outside of Europe.

Further up the BPM ladder, acts like Matanza or Dengue Dengue Dengue (who just released a monster of a new album called “Siete Raices”) easily manage to smash even the club worlds most tech oriented main rooms with a bassheavy mezcla weighing tons.

While the Latin American vibe drills in heavy from the west, Eastern influence is long on the way to complete the tribe in a truly global way. Turkey-based head honcho Oceanvs Orientalis, spearhead of the new oriental hip, is this weeks special guest for Acid Pauli’s “Acid Sundays” at HEART… the next chapter is already being written it seems. In fact, quite some Latin American based producers already have a healthy amount of Eastern percussion & harmonies woven into their sounds… and are always keen on reciting & refining German electronica with an Indie approach. The plot thickens as circles are closing in from all sides.

This could be the first wave of a healthier countermovement, opposing the fake, bling, superficiality and supergreed that the “old” clubworld (and with it the music) stands for/has changed into nowadays. The long woodbeads chain your DJ wears could be a sure sign of being in for a ritual event some point down the line… welcome to the jungle.