To write an obituary about Sola is one of my biggest challenges. I will do this in first-person narrative form but to make sure, this is not about me at all, it just makes it easier for me to get started. And forgive me if there are minor chronological or contextual mistakes in it, if I would have started to ask all friends that knew, worked and/or lived with her over the years to get it all right it could have taken ages to get it done as there were so many…

It was in summer 1987 that I met Sola for the first time in Salinas, and we soon became friends as she was so open-hearted and friendly, it was impossible to not like her. After finding out she was an artist my interest in her became even stronger as art was and still is a big part of my life as well.

Sola relaxing on the beach in the late 80’s: 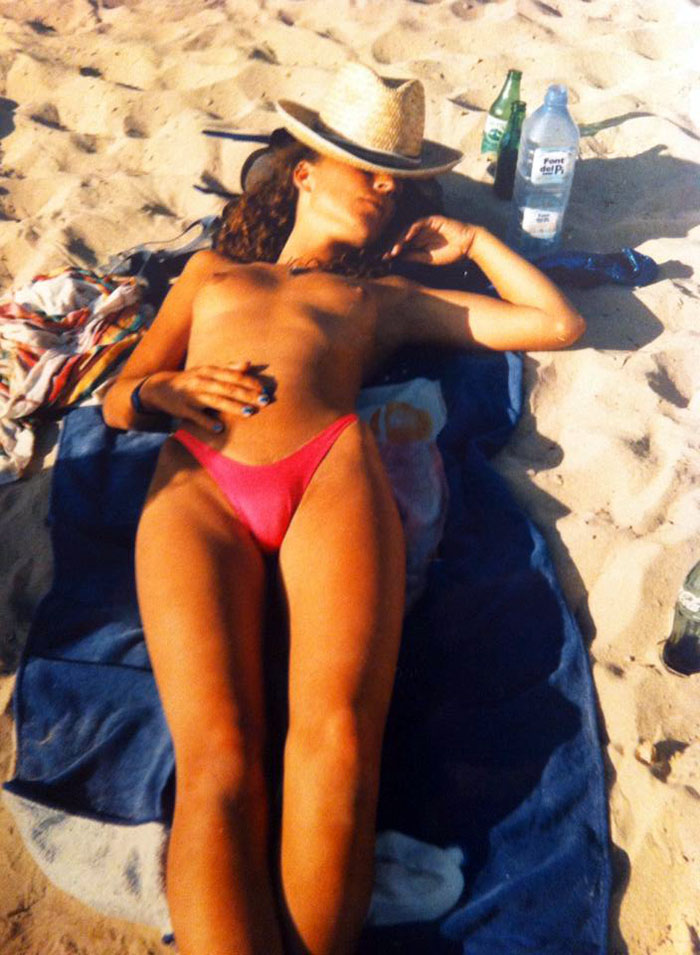 Can Punta outdoor party in the late 80’s: 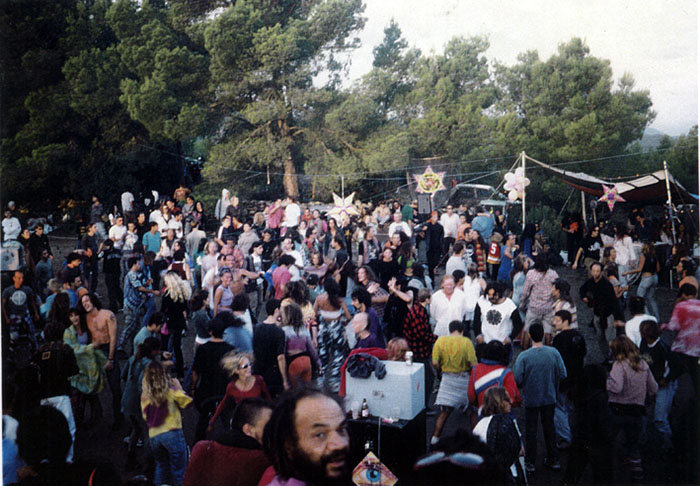 From 1989 to 1991 I had the honor to participate in the creation of massive decorations for Amnesia on a daily basis together with about 10 like-minded freaks. We had to paint massive canvases, the biggest measured 7 x 5 meters which had to be painted in two phases, the first 3,5 to 5 meters, then flipping around the first half to paint the other part, not knowing how it would look like until the moment we exposed it in the club. During my whole summer holidays we were painting up to 14 hours a day non-stop to be able to do the job, she had this inborn authority so nobody would question her word at any time. And she could get quite grumpy if things were not in time or imperfect, but it was one of her virtues to completely oversee any job and take the necessary measures to comply each new challenge to perfection.

Sola with intimate friends in front of one of her decorations: 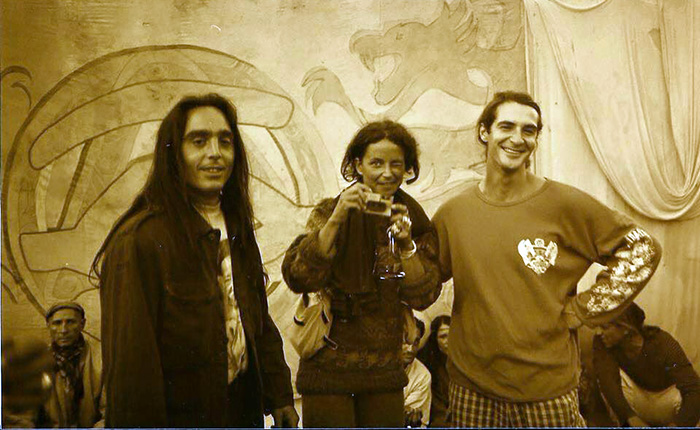 Fascinated by her talent and experience I was willing to leave Germany for good to stay on the island without thinking about it properly – but she was the one telling me off, sending me back home to start my Graphic Design studies in order to have a solid formation to build on, and I would become so thankful for her making me do that for the rest of my life – if it wasn’t for her I would not do what I do today and you would not read those lines here and now.

At that time she was already starting to paint with all sorts of techniques, learning her craft from great artists of all kind. One of her mentors was Esteban Sanz, an artist who would later put his legacy in her hands to watch over it. Already her first paintings showed her great talent, and over the years she became a master herself, reaching a level that made her become the president of Ibiza’s Art Club, a club of the most prestigious artists from this island. In that context she as well organized the annual Art Catwalk, the latest always held in Atzaró, where different Fashion Designers showcased their talent to a theme that was given.

Heike wearing one of her famous costumes made out of bottles of water “Solan de Cabra’: 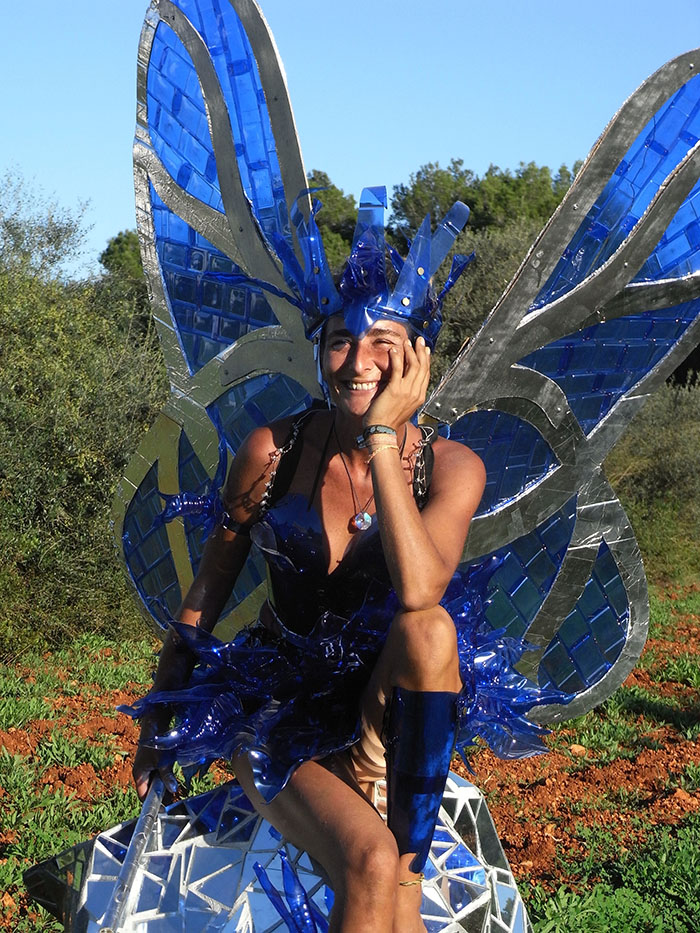 While honing her skills as an artist she kept working in decorations of all kind, getting more and more professional. One of her first big jobs was to decorate the MTV festival held in the quarry of San Antonio in the end of the 90’s, becoming a huge success and the foundation of her international breakthrough. After that she provided massive deco concepts for huge festivals like ‘Boom’ in Portugal, ‘Time Warp’ together with Bamboo in Germany and the ‘Universo Parallelo’ in Brazil, taking with her a whole entourage of friends and co-workers around the globe to be able to comply any job, just as she did back in the years at Amnesia.

Sola’s incredible decorations, although they completely revealed their magic at night creating a virtual reality… 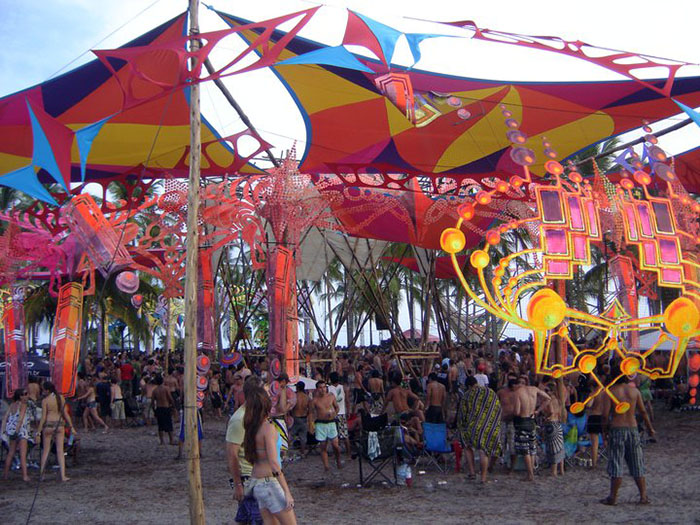 this is how they were made: 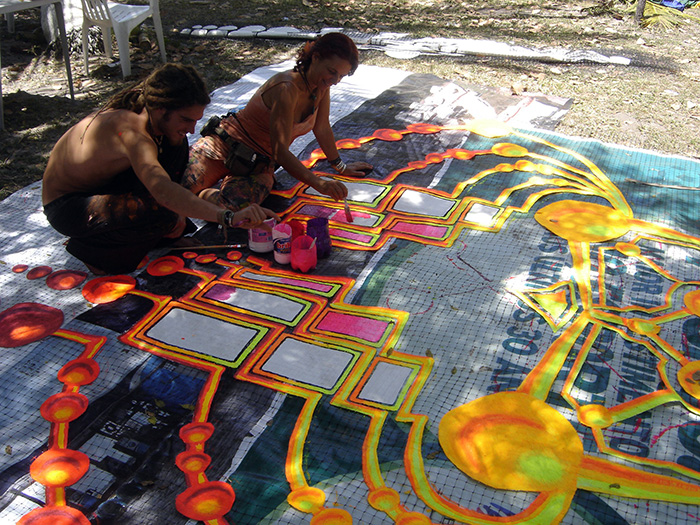 But not enough with that, as she was multi-talented she began to create her own collection of amulets, selling them with great success at local markets like Las Dalias to which she had a very close relationship over decades, decorating numerous parties, Christmas markets etc. Apart from that the first amulets served as entrance ticket to parties she helped organizing in the campo or other off-locations, becoming collector’s items for many people, in fact I got one on the day of the ceremony from a good friend.

A few years ago she had another great idea of how-to-make-a-living as an artist in Ibiza, she created her own fashion brand ‘Piratas de Ibiza’, which instantly became a much-sought-after collection that so many natives and tourists wanted to wear to express their deep connection to this island. It consists of garments of all type, from shirts to dresses and supplements, always in high quality and unique designs, branded with the skull and bones of the pirate flag to honor the history of Ibiza.

some of her creations under the ‘Piratas de Ibiza’ brand: 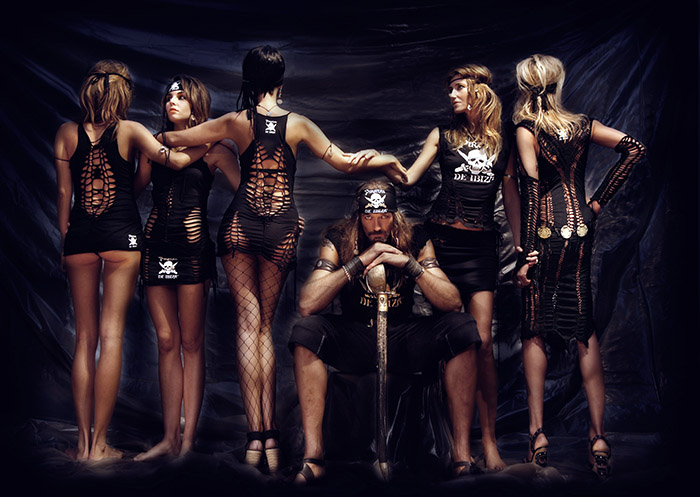 Having finally found the perfect working spot, she joined forces with some friends and rented a huge space near the roundabout by the hippodrome of San Rafael, evolving into a meeting place for all kind of people being interested in art in its widest sense. There she developed further forms of expression such as her incredible collages consisting of hundreds and thousands of snippets of her own art or whatever she found interesting, creating breathtaking pieces of art. 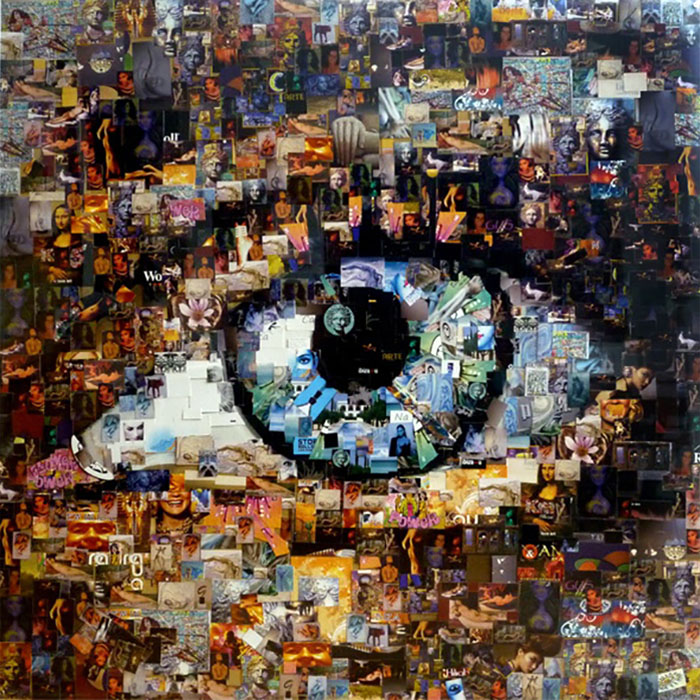 One of her numberless variations of the Goddess Tanit as collage: 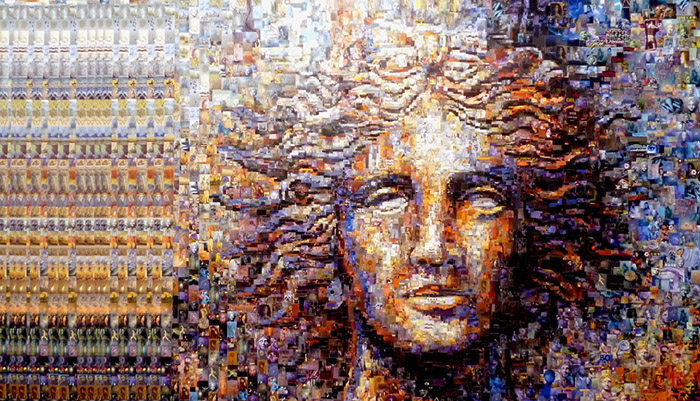 One of our greatest challenges, or better said one of our duties, is to maintain her atelier just as it is, so future generations will be able to explore the extent and beauty of her legacy. 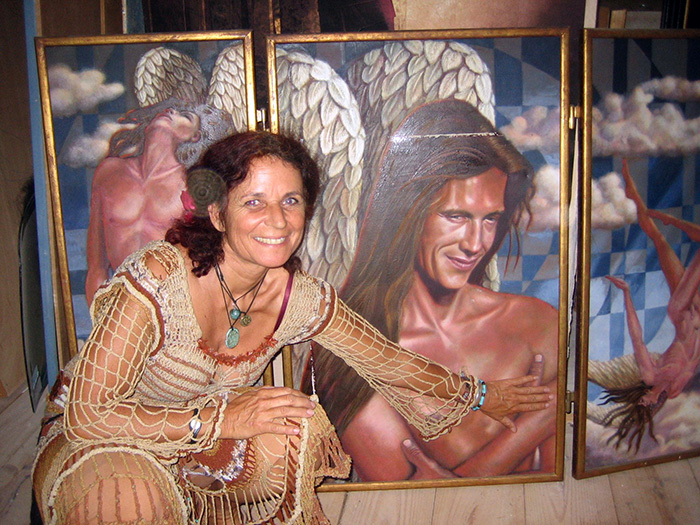 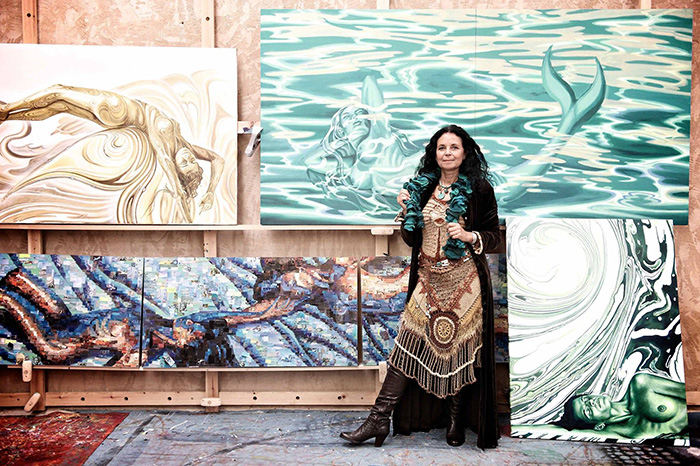 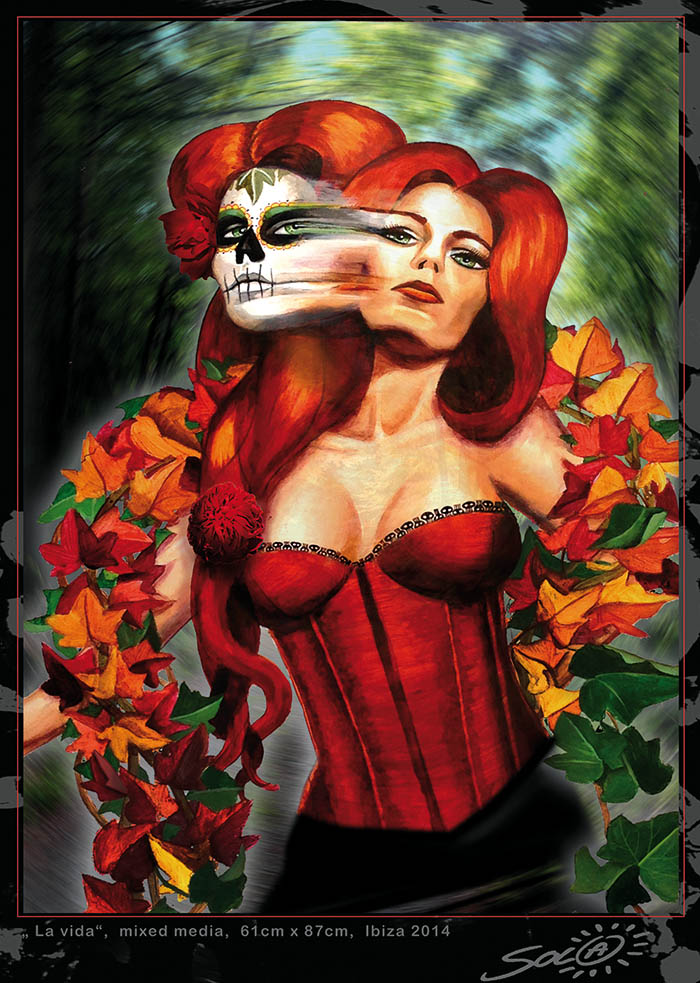 So many people were completely overrun by the fact that she had left us without prior notice, but knowing her character it was not in her nature to ask for help or advice when it came to her personal life. The cause of her death was lung cancer, something quite ironic as she quit smoking already 14 years ago, but as we all know life can be very unfair, there is no such thing as a guarantee for living, even if you do your very best it can hit you at any time. But the fact that she has spent the last days of her life surrounded by closest friends, crossing the line from life to death in the arms of one, gives peace to our hearts, as this was the least she deserved. 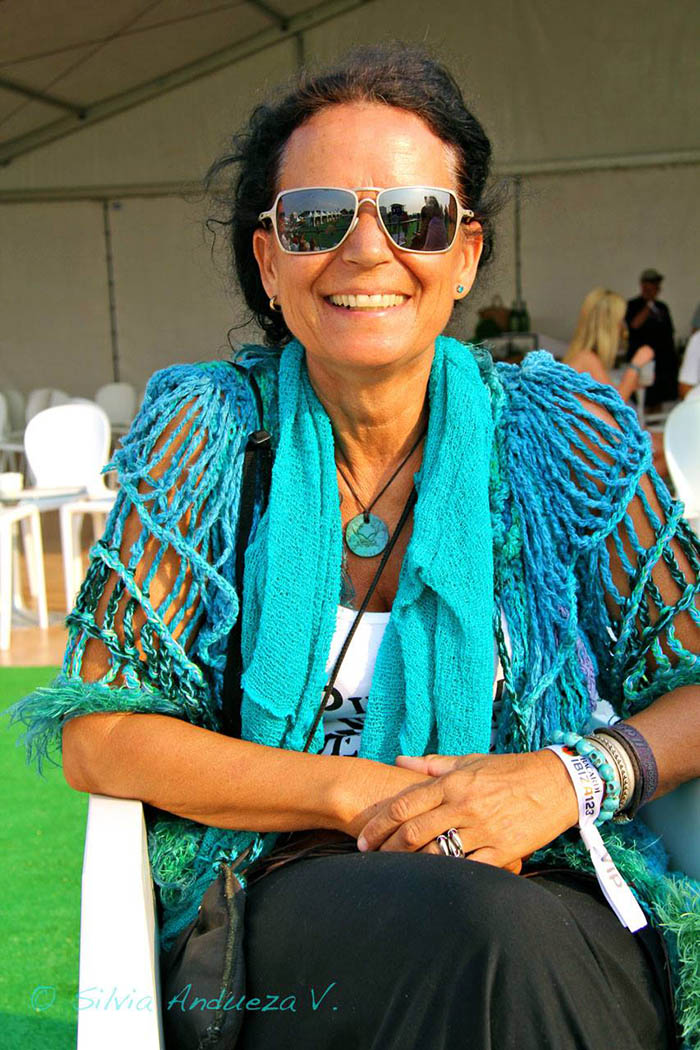 Finally on Sunday the 11th of January we gathered together to commemorate her life at one of the most magical spots this island has to offer, the platform in front of Es Vedra. And it could not have been more perfect, her Spirit was watching over the whole ceremony from the very beginning to the very end, as you can see in the many pictures. The whole sea up to the top of Es Vedra was covered in fog, slowly releasing this majestic rock as the day went by, giving the perfect background for this unique ceremony. The Mandala was created by many many people over the whole day, from children to elders, everybody contributed something to it, making it her ultimate collage, her final masterpiece, with and for her from all of us.

some expressions of this magical day, more fotos in the gallery: 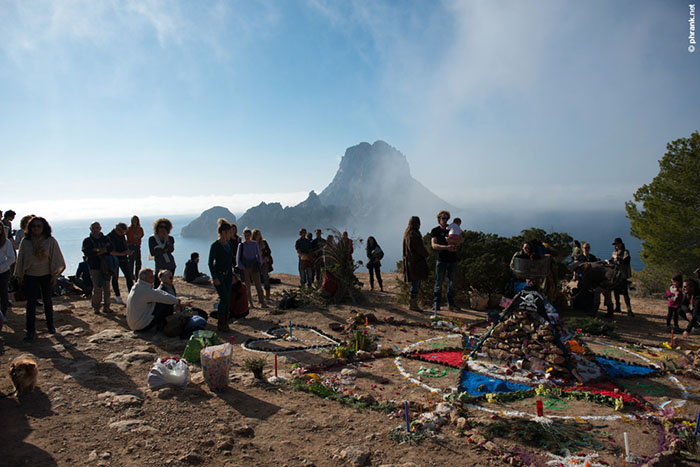 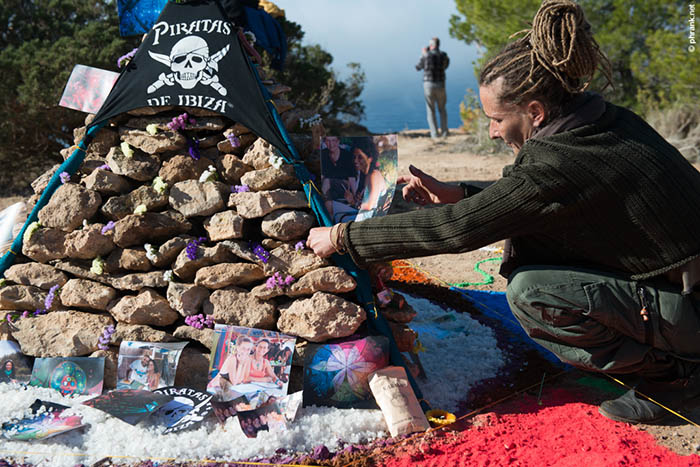 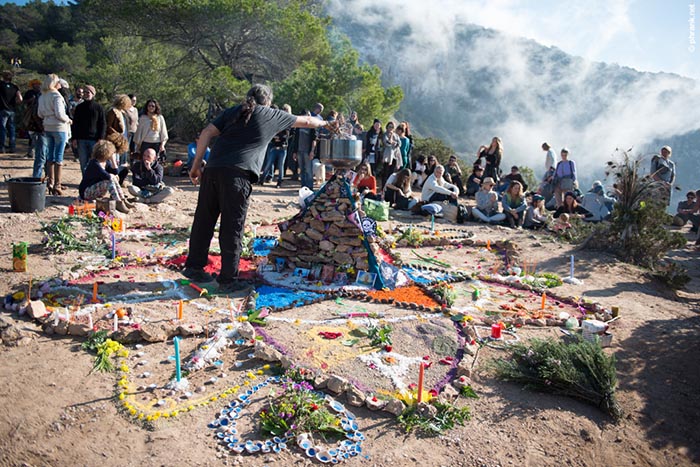 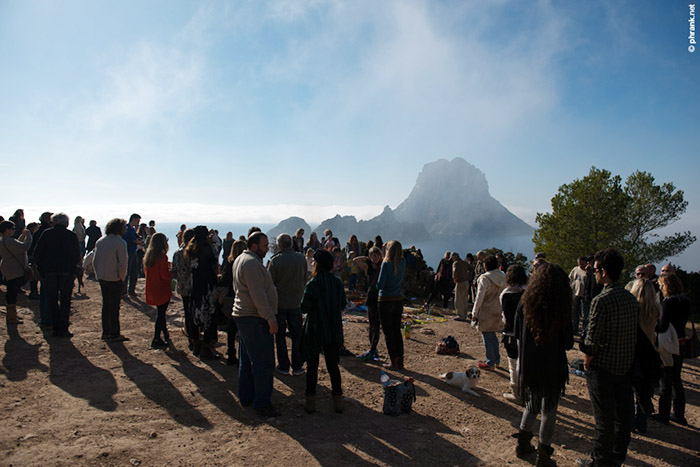 Manu had to climb a tree to try to capture the whole mandala, created for and with her from all of us. 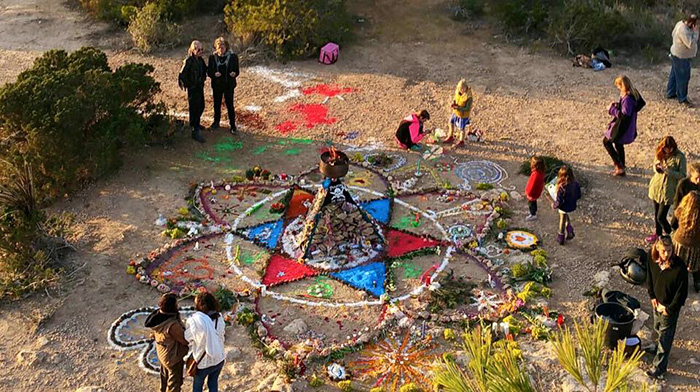 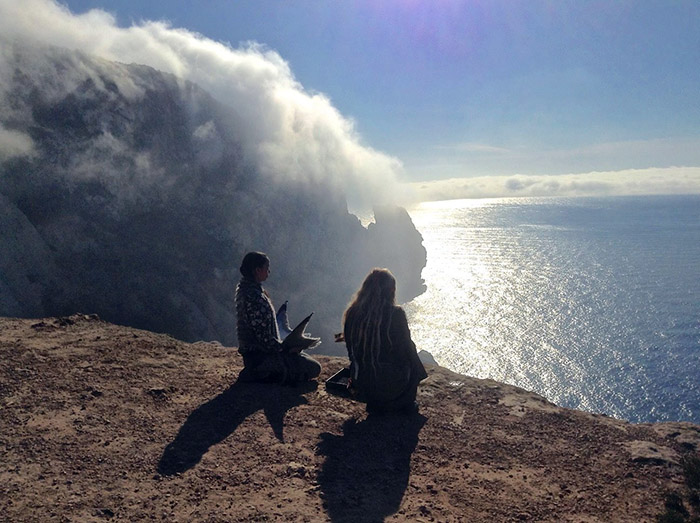 a magical day culminates in an incredible sunset: 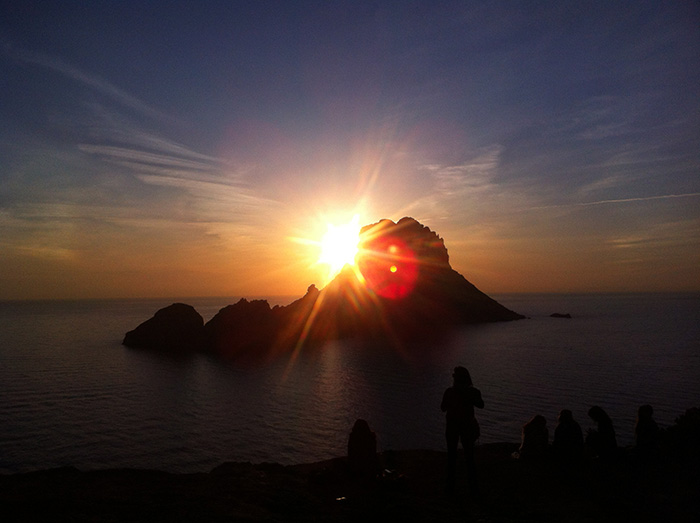 Not only was this day the perfect day to commemorate the light being she was, it was also mind blowing to see so many people meeting again after years, sometimes not even recognizing the friend they had in front, hugging one another promising to keep in touch and not waste more time living alongside each other. 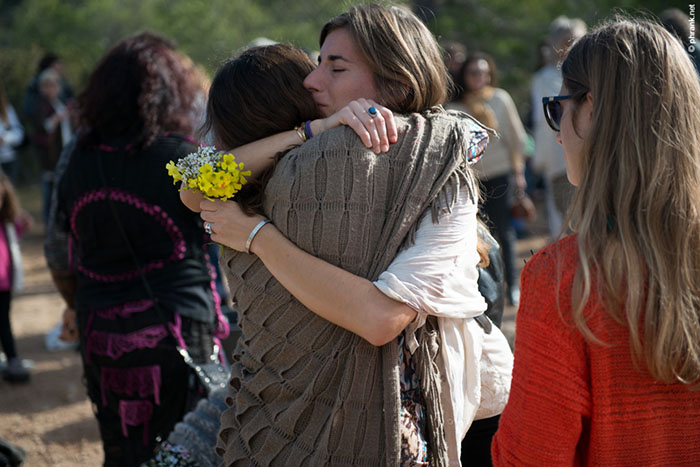 a small impression of this magical day on video:

Life is an instant, a blink of an eye, and we tend to take ourselves so damned serious and get so lost in our daily routines that we so often forget to pause for a moment, to look around and realize we are all one, this whole planet and the universe around it is all the same. We are all made of stardust and should cherish the moment as we live it, as you never know how long it will last.

Dear Sola, thank you so much for your inspiration and dedication, you gave so many people so many reason to believe in themselves, to become greater as they ever thought they could. I know you are in paradise now, the reward for the good life you have lived. See you on the other side.

If you could not make it to the ceremony – there will be more events to come, we will keep you informed on our social networks and on this page about further actions to take place. As said in the obituary, if you like the idea and want to participate in maintaining her workspace as a meeting place for future artists then please contact us here on this page or our social networks, we then connect you to the person in charge.

The pictures in the gallery are in no special order and were collected from various people, thank you all for helping out – you know who you are.