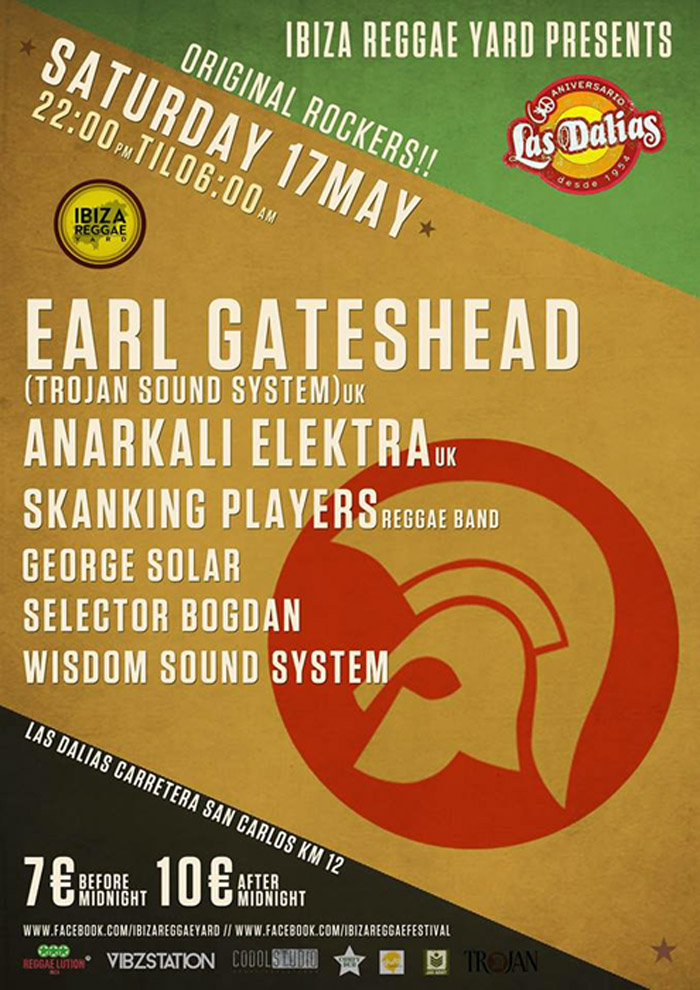 For this months special event, Ibiza Reggae Yard is proud to present its “godfather” (and new partner in crime) in full effect: the legend they call Earl Gateshead is a figurehead in UK reggae and represents one of the finest “classic” reggae labels in history: Trojan. With his impeccable selections and infectious positivity behind the turntables, Earl is bound to set Las Dalias on fire…

…alongside UK selectress extraordinaire Anarkali Elektra and the Ibiza Reggae Yard residents Selector Bogdan, George Solar and Wisdom Sound. The well hung 4 piece roots reggae live band SKANKING PLAYERS round off what will be a night to remember: filled to the max with (and by) original rockers!

Earl Gateshead is the selector and leader of Trojan Sound System, the official sound of Trojan Records. Since its creation in 1968, Trojan Records has led the way in presenting the very best in classic Jamaican sounds. The labels releases have featured the cream of Jamaican talent, with the likes of Bob Marley & The Wailers, Dennis Brown, John Holt, Ken Boothe, Toots & The Maytals and The Inner Circle all included on its illustrious roster. Earl began DJing in 1979 when he played reggae records between punk bands in Brixton and was heavily influenced by the Trojan releases of the time. Today Earl Gateshead and Trojan Sound System tour the globe playing records from the extensive Trojan catalogue, spreading the original message from Jamaica’s golden era of Reggae music. With such a distinguished career and fantastic attitude, Earl has become a figurehead in UK Reggae and continues to spread the message at some of the hottest spots & most prestigeous events around the globe… a.o. at the infamous OUTLOOK festival later in 2014 as well as during the Ibiza Reggae Festival on 27. July.

Drum and Bass, Rhythm, one drop, pull up are synonymous terms within Reggae culture but also brilliant to describe the selector Anarkali Elektra.

Think less genre snob and more dancefloor ripper, with a selection that would make even your grandmother rush the dance floor. Anarkali has played with everyone from Big Daddy Kane, David Rodigan, Reggae Roast, Channel One, Aba Shanti I to name a few… Hot stepping behind the turntables since 2002. Bringing niceness and heatwaves to clubs from Penzance to Bristol, Delhi to LDN. Sirens, airhorns big speakers hands in the air smiles all around and stomping feet to a fiery mix of Reggae Jungle Hiphop Funk but most importantly anything Soulful. Regardless of what she plays, the main ingredient to this dancehall queen is good times.

7euro before midnight // 10 euro after midnight

C U ALL SATURDAY!