As you know we like to not only showcase the nightlife and music but we also care about the beauty of our islands as we live here the whole year round and Ibiza is not only party, but one of the most beautiful places you can get to know.

To help preserve its nature we met with Sandra Benbeniste, Executive Director of the IPF – the Ibiza Preservation Fund – to talk about one of the most important institutions to help preserve our nature, resources and biodiversity. And not only this, the IPF aims to achieve a 100% sustainability of Ibiza and Formentera, a goal that would be fantastic in the times we live and could help other places to learn and achieve the same goal in the near future.

Hello Sandra, it is a pleasure speaking to you, first of all our deepest respect to the IPF, you achieved a lot in the 6 years of existence of then IPF. Please  tell us first where you come from and how you got involved with the IPF.

I am from Barcelona, and have always been very close to Ibiza. My grandfather built a house on the island in the early 70s, and I have spent in Ibiza many of my vacations. Having worked in Guatemala and Mexico for 4 years in environmental projects, I have realized that Ibiza is also a paradise worth protecting and have found that working with the IPF is a perfect way to achieve this goal.

Who founded the IPF and who are the people behind it?

The founders of the IPF were Ben Goldsmith, Serena Cook and William Aitken, with the aim to give back to the island, and prevent Ibiza from becoming another ultra developed tourism destination such as Benidorm.  Since our creation in 2009 we have worked under the umbrella of the UK Charity Ecology Trust. Presently, we are in the process of creating a Spanish Foundation, the Fundación para la Conservación de Ibiza, with a Board and  an Advisory Council of local and international experts.

How do you get the money to finance the different projects?

Most of our funds come from private supporters, many from the UK but also from Germany, Italy and Spain. We have also agreements with local businesses, such as La Paloma, El Chiringuito or Can Talaias, that give their clients the possibility to support us through initiatives such as the “1 euro per table” or “3 euros per room”. We welcome other committed businesses to contact us to explore other collaboration agreements.

The IPF helped to create and sustain the ‘Alianza Mar Blava’, an alliance to stop the oil drilling projects in the Gulf of Valencia – how did that come to life?

3 years ago when I started working at the IPF, I was very surprised to learn that local institutions seemed to have accepted that there were to be oil explorations in front of Ibiza. After talking to several stakeholders, we suggested creating an Alliance that would bring together all of us, from businesses to local governments and NGOs. By coordinating our efforts and showing the central government (Madrid) that all the island was against oil drilling we had better chances to fight against it.

On of the biggest achievements so far is the fact that Cairn, one of the companies trying to get a license to drill, pulled back. How did that come?

We believe that the fact that we showed so much public opposition was crucial, as well as providing technical evidence of the biological importance of the area (dolphins and whales corridor, posidonia fields, etc.).  We also coordinated our actions with international NGOs such as Greenpeace, which promoted action in front of Cairn offices in Scotland, and had very good contacts with Spanish and UK press.

There are other companies still trying to get a license to drill for oil, how do you see the chances for them to achieve their goal?

We are still threatened by Spectrum Geo Ltd and Seabird Exploration. Spectrum applied for acoustic surveys in a very large area of the Balearic Sea. It opened the application several months ago but has not begun the technical process yet, and time goes against it. We are optimistic that Cairn withdrawal can have a strong influence on their strategy.

Seabird Exploration and Cairn have also applied for acoustic surveys at the Golfo of León, North from Menorca. They seem to be gathering their efforts there and technically could have more possibilities. Although it is further from Ibiza we firmly believe we should keep our pressure to achieve a Western Mediterranean free of oil.

The IPF as well supports alternative energies, why is the whole island’s electrical supply still dependent on traditional companies – as far as we know we got an average of more than 300 days of sun per year?

If we want to be coherent, we strongly believe that we should not only say NO to oil but also say YES to renewable energies, and strongly promote them. As you very rightly point out, on an island were we have so much sun we could be 100% dependent on solar energy. Although it is technically possible, legal uncertainty due to changes in national regulation has prevented many from investing on solar panels. 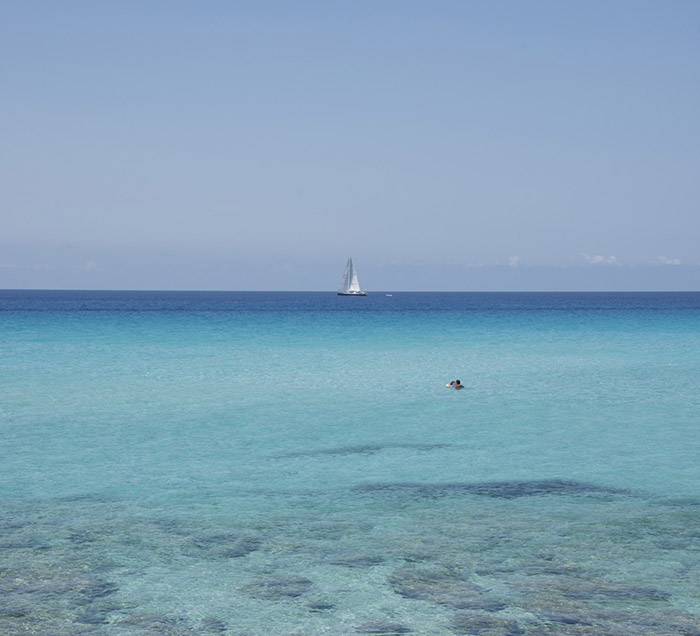 Another very important topic is the escalating water demand on Ibiza, leading to depleted and polluted aquifers. What general solutions are there and what can each person do to improve this situation?

Together with the Balearic University and local NGO GEN, we have presented to the press and the local town halls an important study on Ibiza’s water situation. As part of the study we have included 10 recommendations for a more sustainable water management.  One of the most pressing one is providing Sant Josep with desalinated water, so as not to keep using its very damaged aquifers and to declare them overexploited, to allow them to recover. Of course each of us is also responsible for a wise use of water at our home, garden, or swimming pool.

We got huge fields of abandoned farmland on Ibiza but curiously more and more people ask for organic products, ideally grown in Ibiza, isn’t that a contradiction?

It is very good news that more and more people are asking for organic products. There is in fact more demand that supply in Ibiza, which means that a lot of organic product comes from the mainland.  On the other hand many people have quitted their family land due to the higher salaries paid by the tourism sector. Organic production, with higher market prices offers a good opportunity for young people to go back to the land, provided they receive marketing support and technical training. Our support to EcoFeixes (the local organic producers’ cooperative) and their land bank project, wants to bridge that gap.

Finally the maybe most important question – how can each one contribute to preserve our islands in the best possible way and support the IPF directly or indirectly? We as well read about the ‘1 Euro per table’ action?

We need each one of you to spread the word about the importance to preserve our fragile environment.  You can learn more about our work and support us at our site. Thank you so much for your interest. Ibiza and Formentera need YOU!