Knowing that i won’t ever be more than a Giricenco (a ‘giri’ – means tourist – that lives in Ibiza for many years) fighting for the good of this island that i love so much, it is of greatest pleasure to get together with an Ibicenco that i admire very much for his passion, his ideals and his dedication to not give up in view of so much commercial threat. And that does not hold back to speak the things as they are, or better said to put on paper drawings that show clearer than water where our problems originate where we suffer not only recently but which we’ve seen coming up for quite a time. The person i speak of is an artist called Untaltoni (means ‘a Toni’), passionate illustrator since his childhood with a very clear vision on what is happening on this island.

Hello Toni, it is my utmost pleasure to welcome you in dub. Please tell us first who you are and how you got to do what you do today. 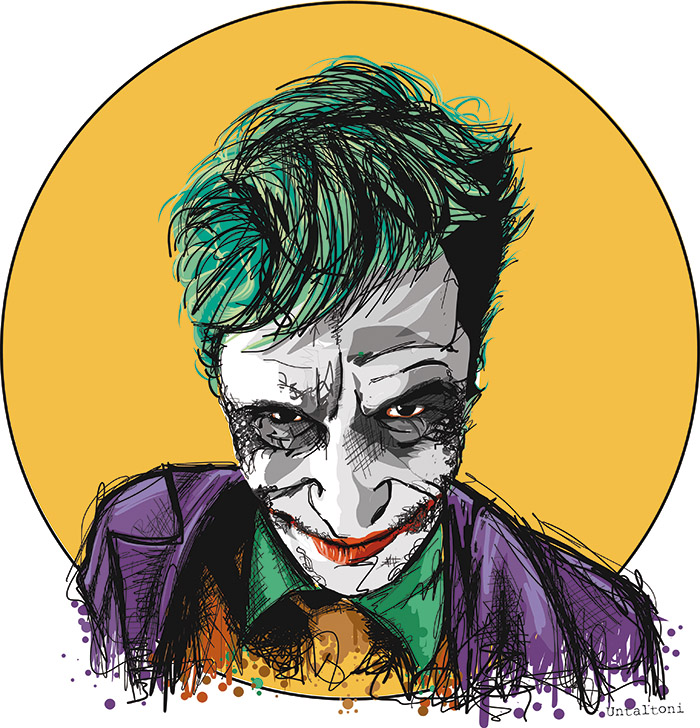 First of all thanks for the invitation, it’s a pleasure to be with you. I am one of the species of ibicencan aborigines that still roam around this island. In love with her and, in consequence, angry and hurt by the predatory and mafia-like bubble that we got ourselves into.

I do what i do for a series of necessities. First for a creative urge, almost physiological, making a day where you create a great picture or illustration, or where a great idea arises, a very different one compared to the ones where there is no output.

Furthermore there is another necessity, the expressive one. The urge to in some way narrate my perspective of things, as my way of expressing is through illustration and photographic experimentation. As a consequence, mostly in my illustrations, the anger i hold inside caused by all the folly is feasible, a folly that we, in my opinion, suffer from as an island, a country, a continent and a planet.

Finally there is the most basic necessity, to survive. A few months ago I commited the headiness to leave a fix job behind to dedicate myself to this. ‘this’ contains the difficult labor to make understand that a creative job has a certain value. The idea that making an illustration or a logo takes ‘just a moment’ is very entrenched and to do a session of photographs is as simple as pulling out your iphone.

So if you, beloved readers of dub, need any of my services I’ll be delighted to do everything possible to leave you totally satisfied. 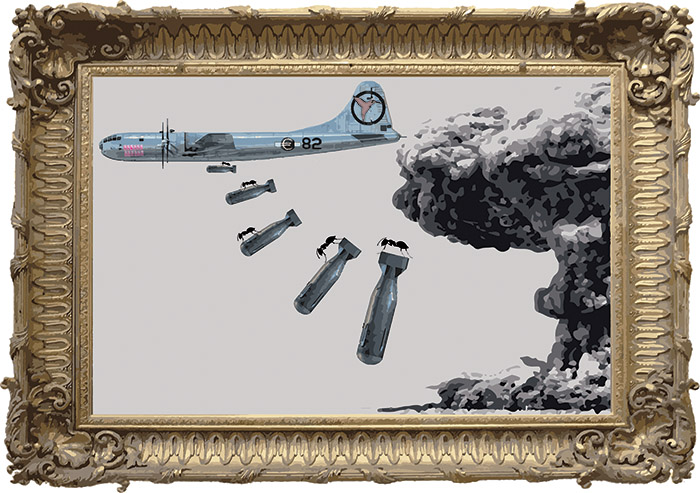 Is it true that we all know how to draw? I remember the counter question you threw back at me being “at what age did you stop drawing?”

In some way yes, in the same manner as we all know how to sing, even if only in the shower… And yes I remember to have you answered the ‘Galician way’ as for when I started to draw. What I mean is that we all know to draw in our childhood. Then there are the ones that continue and those who don’t. I imagine that most of the people who draw will have difficulties to answer this question, as for those who do not draw know when they stopped – ‘since my days in the kindergarden’ for example.

How do you awake your inspiration and to be creative – as there are many ways to get there?

Let me only tell you the legal ones…. I try to be at day and, as I told you before, I got a certain urge to express my point of view about things, therefore the anger about the overall general situation is a great fertilizer for my creativity, but if you want an example we can talk about the situation in the Mediterranean being converted in a kind of concentration camp for refugees while on the other hand we convert it in a luxury waste dump at the mercy of a bunch of millionaires, the powerful and the mafia. While we others look the other way.

You are the creator of our first cover 2018, first of all thank you so much for doing so – tell us what it is about. 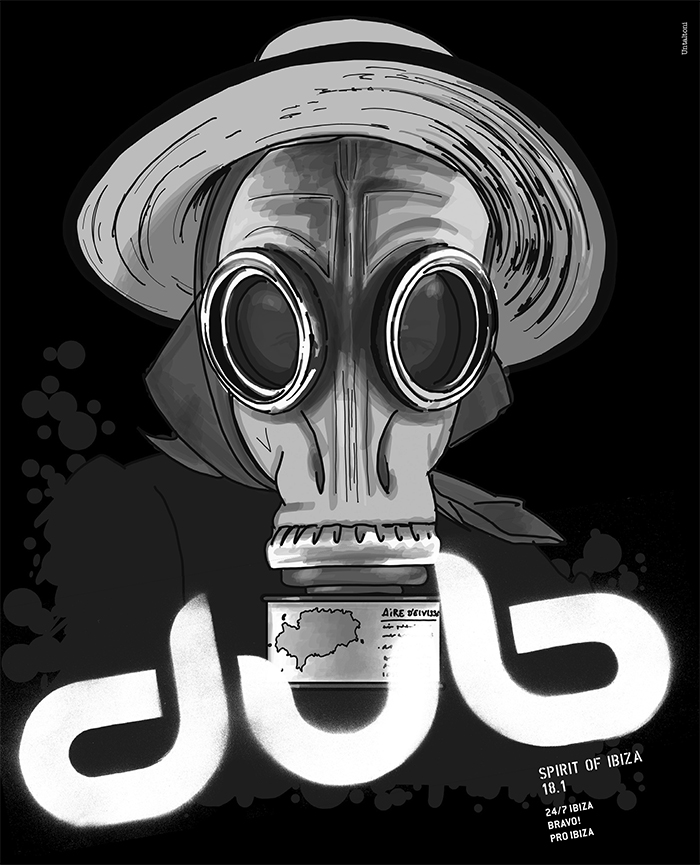 Thanks to you for the faith and for letting me do it. A pleasure. In this illustration a kid dressed in a ‘payesa’ (farmers) costume is wearing a gas mask with an airbox of ‘ibicencan air’. In one way I ironize a product that was released a few years ago as ‘air of Ibiza’ (no joke!) and the idea that this is just what we breathe as it would be our real air. What I try to express is the sensation of nostalgy on the one hand with the Ibicencan air captured in an air box and the suffocation that some of us residents go through (or at least those who stand for it) facing the fetor of what they call luxury forcing us to cover our faces, our identity, with something to be able to bear it.

Theoretically it should have a positive impact, but practically it does harm in many ways. From the lack of medics, police and judges to the exodus of residents caused by the savage speculation with our homes, be it for sale or for rent. This is as for the part of society, because when it comes to our environment things get even worse, if that is any possible. From their campos of ‘luxury villas’ on the coasts plastered by beach clubs, hotels and cement in all its variations until the sea bottom being slaughtered by the anchors of mega yachts.

To be born in Ibiza means you have seen all the development of this island until to where we are at today. Describe it in a few words.

Being Ibicenco the only I can say about it is one word: DISGRACE. 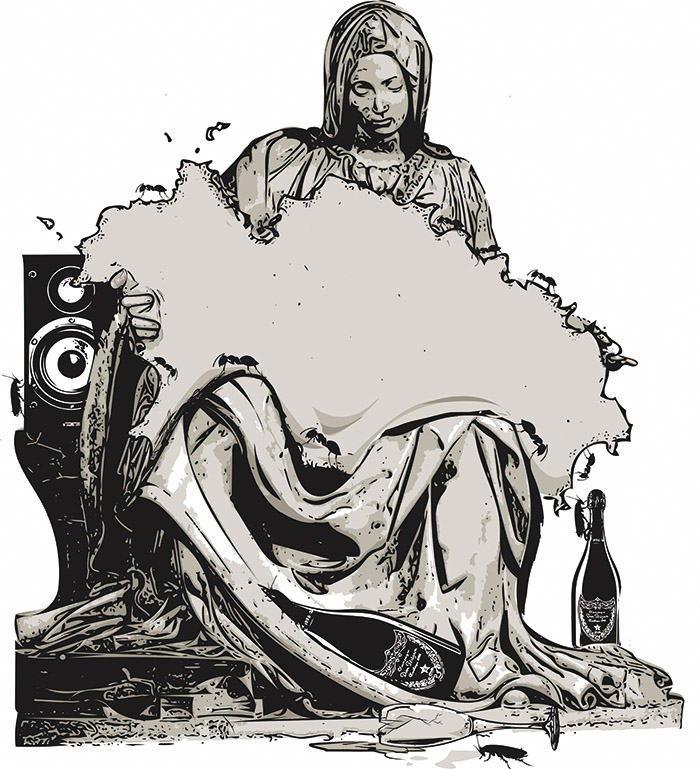 What is it that you love most about this island?

And what is the least?

The colony of humans that inhabit it and the way they treat it.

Do we live in a democracy or is it an illusion they sell us as freedom?

We live in a parliamental monarchy. In the end it’s a monarchy. A kingdom of them with kings and princesses, earls and dukes, sirs and vassals. Well, before that it was even worse as there was a bug being the archon of gods grace that screwed us during 40 years. Even if it would be the same dictator to decide it, we got a king as defined by our constitution. This constitution that got voted by people that are elderly now, with a terrible fear of repeating the worst case that is war. Even if we get to vote every four years, being the ones to vote corrupt parties and descendants of this bug’s ideals, and I want to believe that at the end the ones that the people decide are in power (another thing is who’s in charge). But sincerely the concept of a monarchy inside a democracy, as much ‘parliamental monarchy’ as you want to call it, seems a contradiction in itself.

If there is freedom or it’s just an illusion, I am not quite sure about it lately. I want to believe that yes there is. Therefore I believe I can say that this king that we spoke about before (the one designated by the little dictator) is a male macho slut killing elephants who dedicated his life to become rich and live a father’s life, and as we get to become vassals he doesn’t care, same for his son. Why do I think I can say all this? Because I think there is freedom. But then I look at Valtonik and I start to doubt.

The same doubt I get when I feel to talk loud and clear about a certain mafia being established in Ibiza for many years. A mafia lead by a certain family saga with a famous ibizencan surname. In control from police to town halls, with tentacles in all sorts of economic activities being and having been in Ibiza. Having thousands of wrappers and palm trees distributed in all corners… And I got no idea why I don’t do it. I guess I am not the only one. 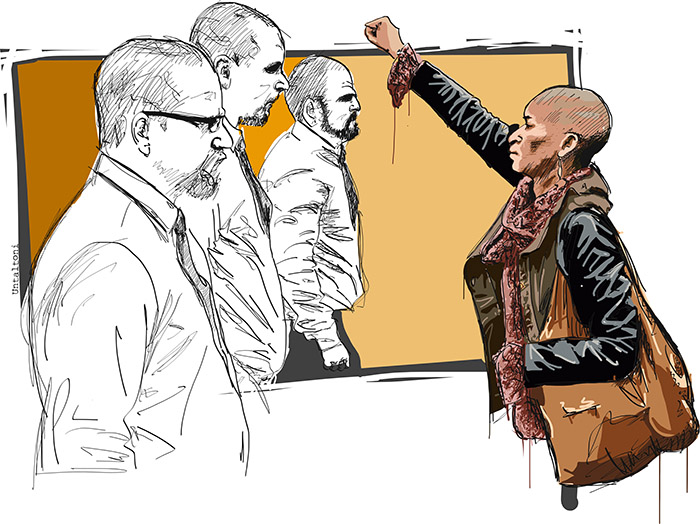 The people united will never be divided?

If the people unite they defeat. In 1789 the French united and since then they do not have to bear nor kings nor princesses. Bad enough that the nation today is (are) dulled.

If you’d have a magic wand and could change five things in an instant on the island, what would they be?

• decrement. I would make disappear all the unnecessary cement (there is far too much).

• sustainability. I’d make it impossible to build more than ecologically bearable (and that is very little).

• economical versatility. The export, mostly of salt (like in the ancient times) and other local products (carrob trees for example) of superior quality would entitle us to become independent of the monoculture that is tourism to maintain our population (in decline).

• education. The population would have an education (public and of quality) where the consciousness and respect towards our island and its surroundings would be one of the pillars.

• a cosmic caprice of justice. A certain family with a famous ibicencan surname and other exploiters of the same clan would dedicate the rest of their labour lifespan with executing the ‘Kelly’ work (cleaning personnel) under the economic labour conditions their very own workers impose.

And on an international level?

• I’d fix the desaster we go trough with the Mediterranean.

• I would end wealth, and as a consequence poverty.

• I would end religions, during the history of humanity the only thing they caused is trouble.

• I would end radicalism. This should be quite easy applying number three plus a good education.

• I would fix the heads of the Americans.

If illustration wouldn’t exist, what would you do for a living?

Music is one of my passions and I don’t know how to play any instrument, which frustrates me, so if I would not illustrate I would probably play an instrument.